The Story Behind Metro Diaries

By Privy Trifles January 15, 2016
I began blogging in 2011 with only poems and non-fiction. After almost a year of blogging I tried my hand at fiction and gradually moved to romance writing after 2 years. The shift was never planned or intended. It just happened. If someone were to ask me, I would always say stories and me, never! And that too love stories, forget it. But the very fact that I wrote my first ever love story at 13 ( I recently found that diary again ! ) and that too from someone who has never read a single Mills and Boons ( you need to believe me when I say that) that was a huge leap. It just happened, and I don’t know how.

Those few initial years was the time when anthologies had started entering the markets with the tag “get published” for all budding authors. It took a lot of push from my fellow bloggers to make me participate in a contest for I never believed in my own writing. One thing led to another and within 6 months I was on a roll. Then came the next question “What about your own book?” and to this I always said “No I am not yet ready for that.” Having grown up reading cult classics both Indian and International I always believe my writing is yet to mature to that extent when I can churn something so beautiful. Sometime in 2013 one evening as I was just scrolling through Facebook I came across this contest in a group where a picture prompt was given asking readers to try describing it in their own words. The winner was to get a book contract. I would be lying if I were to say it wasn’t tempting, it definitely was. Maybe that temptation made me try my hand at it and yes I won it. 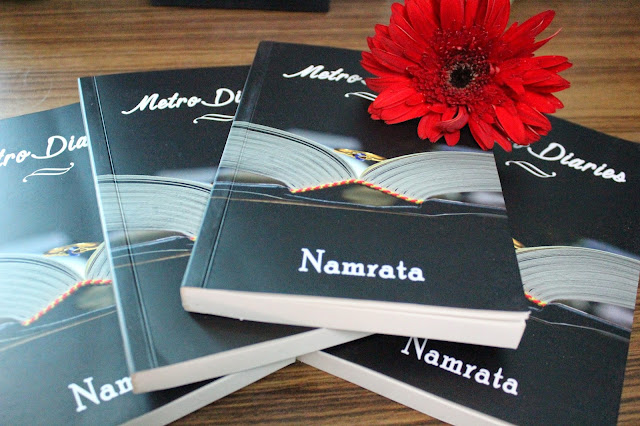 What was I thinking you may ask…? I felt it is some upcoming publishing house trying to gain aspiring authors. It was believable for me because that is how I landed up my first anthology where I was mentored for 6 months and then asked to write a story on a theme given by them. That person was responsible for everything from editing to marketing of the book. Unfortunately the next coming few months were very tough for me, personally, professionally and financially. My writing took a huge hit and hence this victory remained where it belonged – on Facebook. Somewhere in early 2014 that person wrote to me again stating he had gone through my blog and that in case I wasn’t able to write a whole novel I could look at a collection of short stories as Metro Diaries was a popular segment on my blog. Somewhere in the dark recesses of the internet was this book born that night. In the coming 6 months I tried my best to write 20 short stories, it never happened due to the reasons mentioned above. I somehow managed to write 17 and they were approved.

The next step was a cover now; he came up with some real candy floss images complete pink and glossy which somehow never connected with me. Finally I approached a friend whose click I remembered and she lovingly obliged by allowing me to use it as the cover. Before I knew the book was live on Amazon. Felt strange because I was expecting to be involved in every step but then I left it as it. Over the coming months I could see he didn’t do anything at all for marketing or promoting the book and was still expecting a cut for just uploading it on Amazon!

By then I had learnt it all, and the reality dawned upon me that I was duped. Luckily no money was involved and the content was still mine. I took the realms in my hands when the hard copy was released. The reviews had begun pouring and all that everyone highlighted was the “poor editing” that is when I realized what a huge mistake it was to trust someone so blindly. I know coming from someone who herself is a free lancing editor this blooper wasn’t expected and that was a huge let down. I was suggested by people to replace the book with an edited version but for me somehow it was like replacing the answer sheet and expecting the teacher to re-evaluate my report card with better marks now. I felt it was wrong and hence never changed the MS.

Till date every single review that I got highlighted only one flaw that of editing with a very handful not liking the cover page. Not to forget one review (perhaps the only 2 star rating) where the reviewer felt I was too far-fetched from reality in my stories. I don’t blame that person (who had conducted that contest on Facebook) because I am thankful to him for a lot of things. To begin with he showed me that I can write, second he showed me the importance of being involved in every step of your book and thirdly he showed me that at the end of the day the book is yours and nobody else’s so whatever happens, good bad or ugly is yours too!

I have experienced reviewers taking the book and not bothering to review it at all. Most importantly he gave me the encouragement to work on my own manuscript which till now I had never thought about. For me this book denotes hope. At a time when I was in dumps I wrote these stories which acted therapeutic. The very fact that the book has got an average rating of 4 stars in itself speaks a lot to me; it motivates me to keep writing. Each and every review is very precious to me as they all teach me something, the dos and the don’t s. To know that there is still scope for improvement is a good sign according to me.

I cannot thank each one of you who has stood by me in this journey till here as a friend, reviewer, reader or just as yourself.
Life's lessons metro diaries