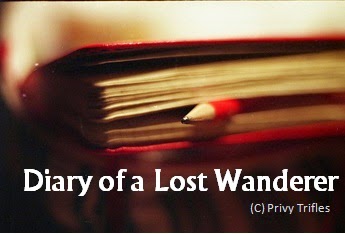 His question took me by surprise more as a shock than a pleasant one. I had hardly known him for few months now and here he was telling me what was wrong with me, with an accuracy nobody else had managed till now.

“This is it.” My heart seemed to say.

As a child I had my parents play the role busy executives more than being my parents which made me a loner since a very young age. By the time I reached my teens I was so used to being with myself that I didn’t have a single best friend which if I were to look at it now, was pretty abnormal. But then who was there to witness this abnormality, none. So it continued to grow till my adolescence to become a full grown tree within my system ensuring that I was tagged the introvert, which I wasn’t.
I had convinced myself that I was a happy person from inside, for I felt I had no reason to be not. And gradually as I become an adult, people perceived me as a happy person, one who always had a radiant smile on her face, gait that was like a breeze and one who was carefree in every sense. What none could see was the gaping hole in my heart that kept getting bigger and bigger with every passing day, the loneliness that used to keep gnawing me from within. A hole that gradually became an abyss, a point of no return. All the pain, hurt and rejection I earned I would force it into the abyss so that the mask of happiness continued to shine through. It was as if I had built a huge wall around me, unbreakable and impenetrable.

For hours together I would keep staring at people all around me at all possible places - Trains, roads, parks, cinema theatres, restaurants and coffee shops trying to feel their laughter but the only thing I could feel was the stinging pain in my heart of not having been blessed with something like that in my life and from there the dark hole would take over hiding the sunshine of joy for the time being.

Four months ago, I met him just like that. My job of a travel consultant ensured I meet lot of people daily but one glance at him and somehow I knew he wasn’t a part of “people”. There was something different about him. Casual conversations replaced official discussions soon and gradually we moved on to sharing a few cups of coffee together. This was probably our fifth coffee together in the last few months that we had known each other. And here he was, listening to my heart the way I hadn’t till now.

I had read somewhere, “You don’t create walls around you to protect yourself. You create them to see who loves you enough to break them and reach the real you.” Today for a moment I wanted to believe in those words. As with those words of his, he had already entered an area of my heart where trespassers were not allowed.

In reply to his question, I just managed to smile meekly leaving it on him to guess whether it was a yes or a no.

P.S: This was a very impromptu write-up. Some random thoughts, though now I have the urge to take it further. Would love to hear your thoughts on this.
fiction Life's lessons Lost Wanderer Relationships romance