My tryst with marriage: Part Three The Ultimate War – To marry or not to marry 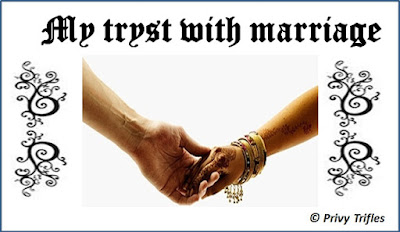 
30th August 2009. I still remember the date very clearly. I was reading the Sunday times when an ad caught my attention. It read:

I could not believe my eyes. It was “ME” who was being described here and a groom being sought for. “Papa……” I called, walking with the paper in my hand towards his room. I showed him the ad and his expression said it all. I went back to my room and sat down with a thud on my bed. All the efforts had proven futile. I had tried convincing them so many times to give me some time before they get me married, but no. The social pressure and the “don’t-get-me-wrong” well wishers around us proved to be stronger than my pleas. Finally here we are, waiting for someone to answer to this ad and rescue the damsel in distress by getting married to me.

Being a part of this warm and loving Indian society, [pun intended!!!] I am used to people who seem to more concerned about my marriage than my parents and hence could foresee the storm which was heading my way. The moment I completed my masters I noticed my parents undergoing a gradual change. There were hush hush discussions taking place, secret meetings with probable groom families being organized, my pictures being circulated along with my horoscope and I was the topic of discussion at all social gatherings getting weird stares. I could smell the broth known as “marriage” being cooked.

One fine day when I felt it was enough, I confronted my parents about it. I was taken aback to hear the usual stuff we are your well wishers etc. With a lot of cajoling I managed to convince them to spare me at least for the next 2 years till I reached a decent stage in my career. [Please…don’t ask me to define that decent stage as I myself am clueless …but I know most of the girls out there would understand what I am trying to say here.] But I think I had asked for too much; because exactly the next day I came across that matrimonial advertisement. The only thing my parents could assure me was they would not force me into anything.

The final decision lay in my hands and unless it was yes from my side nothing would move forward. I let out a sigh of relief hearing that. After sometime when the anger had subsided, as I re-read that ad I broke into hysterical laughter. Reason being very simple I was not even remotely closer to the description given in that except two things – I was MBA by qualification and was working with a reputed MNC.

I could only imagine what kind of person would fall for this and approach my parents only to know the real me which was the complete opposite and break into more peals of laughter. Ok…to make it easier for you I will describe myself in few words. Well, I am 5’8” tall, athletic, black belt in karate, ardent basketball player and have been a girl scout throughout my school days. Now amidst all these activities the last thing on my mind was beauty. Tom-boyish is a more appropriate world to describe me. I consider myself to be average looking with a wheatish complexion.

So obviously this description was making me roll on the floor with laughter. I was convinced that this was not going to work and as soon as “they” would know the truth there would be nothing much to do. This was my strategy. Just be yourself. The best possible tom-boyish behavior was to be put on display to scare all the probable grooms away. I was rubbing my hands in glee and waiting for my first victim……. I almost felt like that vamp in a teleserial chuckling to herself…”He He he he haaaa….ab aayega mazaa.”