Diary of a lost wanderer : Wanted - Dead OR Alive 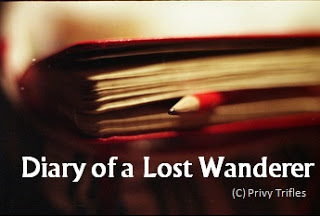 Tonight I am unable to stop. The toxic taste refuses to leave my mouth. I tried everything. I gargled with Listerine at least half a dozen times. Since that fateful moment I have consumed more than 4 packets of chewing gum but to no avail.

I am writing this sitting in the bathroom. I am scared I will puke anytime and I don't want to risk Mamma's wrath yet again. Since morning she is so angry with me. I don't have it in me to fight with her one more time.

Now how is a 13 year old supposed to know that "Harmful if consumed internally" doesn't mean "Poisonous enough to cause death". I gulped down the whole bottle of her favourite Eau-de-Cologne sometime after breakfast thinking it will kill me by evening. Everything around was just getting too much to deal with and I felt this is the best way to get out of it all. 13 freaking years of being alive and I cannot do one thing right. Such a failure has no right to live!

Soon, the whole house started smelling of Eau-de-Cologne and by the time Mamma came home it felt as if someone had mopped the floor with that today. She started by interrogating the servants and then went on to ask if a bottle had broken by mistake. It took her a good two hours to reach me, by that time I was convinced I will die any moment. My insides were all cold and I could barely breathe straight. Every breath was an effort, my fingers were turning numb and feet had almost no sensation. I sat in my room on my favourite red chair, waiting for death to take me away from it all. I looked around the room and found nothing that made me want to stay alive or even carry it with me to the other world. I was glad that finally freedom was not far.

My mind was having trouble composing my thoughts when the door opened with a loud thud and there stood Mamma.

'What have you done now?" She questioned me in an accusatory tone.

Her face appeared hazy, I didn't know if it was because of my tears or because of what I had consumed sometime back. My lips were quivering. Before I could process it all, a resonating slap had landed on my right cheek... or was it left? How does it matter!

"By consuming this you are not going to die. Such a sore loser you are, aren't you? Trying to commit suicide but with such cheap tactics which won't take you anywhere. Isn't what all you have done till now enough that you want us to bear some more nonsense because of you? How selfish can you be? Now wash your face and come down for lunch."

With that she was gone. I was scared now because the only thing that my mind registered from her words was ' You are not going to die...'. I stared at the various cut marks on my wrists and forearms, unlike what they showed in movies none caused my death. Do they all lie? Or wait, should I slit my throat next?  - My thoughts were all running berserk not able to comprehend what had happened, was happening or will happen now.

It is close to 10 p.m. right now, and I have not eaten anything since morning. Atleast thrice in the day I could taste the cheese parantha I had in breakfast in my mouth. The bile kept forming in my gut, threatening to come out and settled uneasily uncountable times. But I am alive.

I don't know the why, how and what. Right now all I know is I am alive.

But what I wanted to know, always - then, now and forever- is am I wanted? Dead or alive, does anybody want me around?