Today was just like any other day for Anirudh; yet another rejection. Off late life seemed to be a chain of rejections for him. One thing after the other nothing seemed to work. He kicked the sand in frustration and continued walking on the beach. The slow music of the dancing waves adding up to his somber mood. “Where is all this leading to?” He thought “And where do I want to do” he asked himself again and again as he tried to gather his thoughts which were wandering aimlessly.

Coming from an upper middle class family Anirudh had it all – a good upbringing, an upright education and high moral values, but still luck seemed to evade him. His father had spent his entire life working in accounts department of local municipality office leaving him with very little time to be there for Anirudh. The only thing he could give Anirudh were his high expectations. Carrying the burden of his father’s expectations for the last 2.5 decades it was now getting cumbersome for him. His mom a God fearing lady balanced out in places where his father could not. She was always there for him, as a friend and a confidante but could barely do much when it came to her husband. Like a typical Indian woman she considered it disrespectful to do anything against her husband’s wishes.

Equipped with a fancy MBA degree from a leading institute, Anirudh thought he had got it all when the demon of global recession decided to give him nightmares. Amidst all this chaos the only solace he had was Priya, the love of his life. He had met her in the first year of college and since then they had been inseparable. But in the past couple of months cracks were beginning to appear in their fairyland. Priya’s family was pressurizing her to get married and without a job Anirudh stood no chance of even being considered a suitor. With the pressure increasing every passing day romance was replaced with arguments. Just two days back they had a terrible fight with Priya giving an ultimatum to him. “Enough Anirudh.. I have had enough of everything. You just have one week to find a job or else it’s all over between us.” She screamed before stomping away from there.

The clock struck eleven in the nearby clock house with a bang bringing Anirudh back to reality. It was close to midnight but he did not feel like going home. He did not want to face his father or rather he did not want to face anyone for that matter. He had switched off his cell phone long back to avoid any type of contact with anyone including his mom or Priya. Not that she would call. After that day Priya had not called him. He did not blame her completely for her behavior for somewhere deep down he knew she was right. “Everyone else except me is right” he muttered through clenched teeth.

Just as Anirudh continued his stroll towards the unknown he saw a small crowd gathered under a lamp at distance. Though he did not want to speak to someone he knew; somehow some strangers for company seemed alluring. Not knowing the reason behind his behavior he moved towards the lamp taking long confident strides. As he went closer he observed a man sitting on a mat with a caged parrot and lot of cards spread before him. He heard from the crowd of people that this man could foresee the future and was pretty accurate at that. Someone even shared his past experience with him and how successful he was.

It is said that sometimes in life your mind reaches a crossroads where all the logic fails. Perhaps it was one such moment for him. Perhaps his mind needed to hear some good things that lay ahead for him. Maybe just maybe it would give him the strength to continue making attempts and finally meet success.  Jostling through the crown he reached the centre coming face to face with the fortune teller. A dark man with bushy moustache he did have an air of authority around him. His big black eyes seemed to hold so many secrets. The yellow light from the lamp creating a halo around him, making him seem angelic like a divine messenger. Without waiting for a moment Anirudh stretched out his hand with a ten rupee note saying “My future”. That man opened the cage and beckoned the parrot in a gruff voice. The parrot strode past him picked up a card from the lot and handed over to that man. Anirudh’s heart started pounding loudly as the man glanced through it and suddenly looked at Anirudh with a questioning glance.

One look in his eyes and Anirudh knew everything. He seemed to have read the doom spelled out clearly in his eyes. Fear gripped his heart as Anirudh did not have the courage to hear what was in store for him. He cursed the moment he had decided to come here and wanted to run away from there but his legs did not have the strength to do. It felt as if the man pulled him like a magnet. “Ahem...” the man cleared his throat and began saying, “ All that you think of will not come true!” Listening to this Anirudh was aghast; finally all his fears had come true he thought. Nothing was going to work out the way he wanted it to be. I will eventually lose Priya also he concluded. He took out his cell phone and switched it on wanting to speak to Priya, one last time when he suddenly started gasping for breath and collapsed on the floor. People surrounded him helping him regain composure when his cellphone beeped. One new message received it said. – Congratulations, you have been selected for the position of Business Development Manager in our company. Our HR will get in touch with you soon for the formalities. 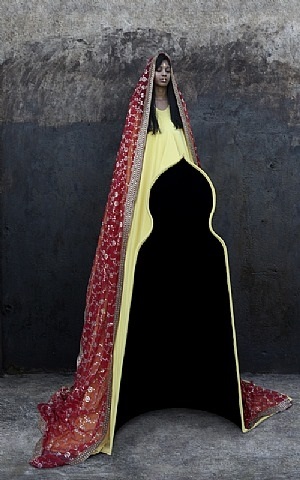 Kalindi's Dream Recently I attended a workshop led by eminent author and poet, Sharanya Mannivannan where we were given a visual tour of the Museum of Art and Photography based in Bengaluru and asked to write pieces inspired by the work we saw. This micro poem is inspired by the painting Kalindi's Dream  (pictured above) a work by Patrizia Maïmouna Guerresi, who works with photography, video, and sculpture.
Keep reading »