I am busy - Chronicles of a jobless old man


It was a sultry summer afternoon. There was not a soul to be seen on the streets owning to the heat. The trees were all standing still as if they had become a statue in the Sun God’s regime. It seemed as if the nature was dressed in shares of brown and rust with only a red post box adding colour to the otherwise dull background. 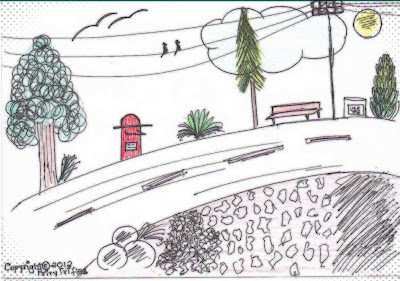 From the far stretched other end of the road you could see the silhouette of an old man walking towards the post box furiously. He was sweating profusely and was constantly wiping his sweat with one hand while clutching a bunch of letters with the other. On reaching the post box he collapsed with a thud on the pavement. Wiping sweat beads from his forehead he fished out a bottle of water from his jute handbag to quench his thirst.

After drinking some water he settled down himself on the pavement. His gaze kept on shifting constantly from left to right and right to left as if waiting for someone. Feeling disheartened on not seeing anyone he started fanning himself with the letters he was holding. Slowly as the temporary breeze made him feel better he closed his eyes to catch a short nap.

After what seemed like a quarter of an hour had passed he woke up with a jolt from his nap on hearing a bicycle bell ringing somewhere in distance. He suddenly regained his composure and started looking in the direction from which the sound seemed to be coming. His old and tired eyes shone as he saw a postman coming towards him on a bicycle. As he reached near him, the old man got up to hand over the bundle of letters he was holding till now.

‘Babu….how many times I have told you before. Just drop the letters in the box and go. I will collect it later. Why do you need to sit here waiting in this heat? What if you catch a heat stroke? It is not good for you at this age.’ said the post man sounding concerned.

‘Hmmm….’ The old man grunted ‘Take this and go’ He added handing over the bunch of letters to him. ‘How do I confirm whether you have actually collected these letters or now? Why will you think all this…huh?’ As he turned to leave the postman said, ’Wait I will drop you…how much will you walk in this heat?’

‘There is no need…’ gruffly replied the old man. ‘I have other tasks to complete on the way. You won’t understand .Leave it…Go on your way… I am busy!’ he said as he started walking away leaving the post man astonished.

Meet Mr. Subbiah Iyer. 62 years old, retired government official residing at Kandaripattnam with his wife. He stays in the upper middle class locality of Padmanabhnagar in a beautiful house named Kanaka Nilayam after his wife Kanakamahalakshmi. Kanaka is how he likes to address her fondly. Basically Mr. Iyer hails from a remote village named Oodaripetam on the banks of river Saranya where he spent most of his childhood, got married and later on moved to this city in search of greener pastures. For good or bad he had settled in this city for more than 3 decades now and was a known figure at least in his area owing to his nature.

Having retired two years ago from his plush government job he practically has nothing to do these days. But out of habit to keep himself busy he creates work out of thin air making it seem utmost important and life threatening incase ignored. He had a weird sense of urgency when it came to his work being executed and it implied everywhere staring from his office, bank, grocery shop, fruit vendors, vegetables sellers, doctors, electricians and almost anyone who would fit in the criteria of doing ‘work’ for any normal Indian household. ‘Huh’ and ‘I am busy’ were his two favourite words as his each statement would invariably begin with the former and end with the latter.

He detested the idea of postponing work even for the most practical reasons. For him NOW meant the next immediate moment and nothing beyond it. He hated it when his instructions were ignored and expected people to be at his beck and call 24 X 7. Having said all this he was a man who strongly believed in ‘Simple living high thinking’ surviving only 6 pairs of shirts, 3 pairs of pants , 2 lungis and 1 pair of chappals since last 3 years. Being economical was his secret mantra for living.  Till date he has never used any vehicle except his loyal black bicycle which he had been using since past 30 years. Off late due to the development of arthritis he found it difficult to cycle around the town and thus chose to walk anywhere possible.

His wife Kanaka was an epitome of generosity and kindness. She would not even let a beggar go from their home empty handed. She led her life with a single motto ‘Charity begins at home’. Her servants, sweeper, washerwoman, gardener and postman, everyone would have experienced her generosity in some form or other.  They both had been blessed with two children - a beautiful daughter Lalithambika and a handsome son Bhaskaran. Both were happily married and lived in different countries busy in their own family lives.  Almighty had been very kind by blessing them with sufficient money to lead a decent lifestyle but Subbiah thought otherwise. He was stingy by nature and for him every penny was precious.  He detested Kanaka’s generous nature as a result of which they used to have many clashes.

Be it rain or winter she would begin her day at 4 am without fail. Finishing her morning chores she would spend an hour daily doing various poojas to the deity at home. She would prepare sumptuous meals to be offered as prasad and distribute generous helpings of it to everyone whom she met during the course of the day.

During the day she kept herself busy in doing other menial jobs at home, visiting the temple and inquiring neighbours well being. She would take an afternoon siesta for about two hours before beginning her evening chores which involved cooking dinner and buying vegetables or groceries if required. She would end her day by 9 pm.

Quite opposite to his wife he was a late riser. His day typically began at around 7:30 am. Slowly he would go about his morning chores which involved a 45 minutes newspaper reading session and a half an hour pooja. At around 10 he would leave the house and go to a nearby temple. After offering his prayers there he would walk down to the library which was about 5 kms away. He would spend another 2 hours there reading the same news from various newspapers and chit chatting with other members of the library. At 12 pm sharp he would get up to leave the library and start walking towards his home.

At 12:30 he would reach his home for lunch. He would take his afternoon nap from 1-3. After freshening up, at 3:30 pm he would sit on his desk at home and begin his calculations. Nobody knew what he did between 3:30-5:30. But there were strict instructions not to disturb him as he sat there in one corner motionless busy calculating something. His wife always pulled his leg by calling him the accountant of Lord Kuber. According to her only His accounts could be endless.

As the clock showed 5: 30 pm he would leave the desk to have his evening cuppa before leaving his house for his evening walk. He would go to a nearby park and spend time there till 8 pm to return for his dinner. His dinner was usually followed by 2-3 hours of television time as he enjoyed watching daily soaps. He ended his day by 11:30 pm.

Be it any season or reason neither Subbiah nor Kanaka would change their timetables. They stuck to it with the precision of a clock. Nothing on this earth could deter them from this schedule. For some unknown reasons they detested talking to each other as it always ended up in clashes and thereby most of the times their conversations were limited only to ‘yes’ or ‘no’.

Hitherto their life might seem pretty simple and dull. But make no mistake. Subbiah’s life is full of adventures as everyday there is something happening with him. It is as if trouble chooses him each day resulting into funny situations. His docile attempt to keep himself busy proves to fail each time with a renewed vigour.

Disclaimer:  This story has not been written to show anyone in poor light or to make fun of. It is written with the intention of showing the reality dosed with little bit of humour to be taken with a pinch of salt.

P.S: I have tried something different this week at Sunday Scribblings. Please let know what you think of it as that will encourage me to continue with more episodes of this story...

Hope you will like reading this one!
fiction Humour Life's lessons memories